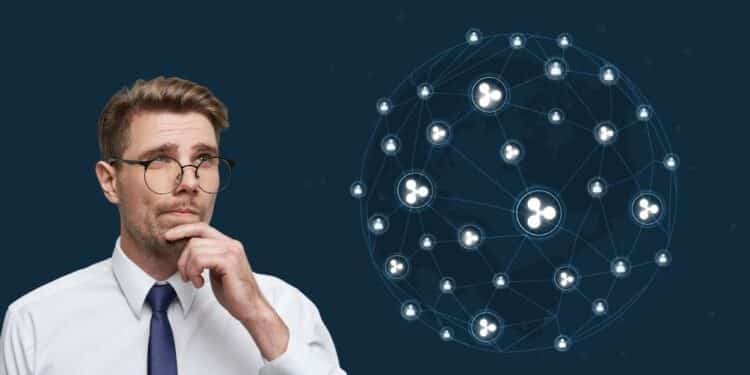 Ripple was created to carry out cross-border transactions effectively. Ripple relies on a common shared ledger, which is a distributed database storing information about all Ripple accounts. The XRP Ledger uses a consensus protocol that relies on a majority of validators to record and verify transactions without incentivizing any one party. The XRP Ledger is in many ways a more transactional, functional, and decentralized ledger than either Bitcoin or Ethereum, which will only increase over time.

Ripple is a decentralized network, and it is operated and owned by Ripple, a private company well-known for cross-border and global transactions. Even though it has unique cryptocurrency tokens, both Ripple and XRP cater to various uses. Since its inception, there have been arguments about Ripple whether it is decentralized or not. Let us analyze a few areas in which it is decentralized or centralized.

Ripple created the cryptocurrency XRP in 2012 and changed the name to ‘OpenCoin’ after a month. The Company renamed itself in 2013 and shifted to California, where it was named Ripple Labs. By December 2014, Ripple Labs began working with global payments service Earthport, combining Ripple’s software with Earthport’s payment services system. The partnership marked the first network usage of the Ripple protocol. The company has partnered itself with various organizations, and it controls and holds the XRP supply.

BitMEX, a popular exchange, has set up a research team to look specifically into Ripple’s consensus protocol. They came out with a report with several complex findings that are seen in the consensus protocol. Further, in-house testing disclosed that Ripple could change its ledger and has total control over it, which makes it centralized. But Ripple claims that it is a decentralized network and it merely carries out marketing strategies and the terms of services for XRP. XRP’s autonomy is three-pronged:

Utility — XRP fuels payments and can do so with or without Ripple’s products.

Ownership – Investors who hold XRP do not own any equity in Ripple.

Decentralization – Ripple runs fewer than 10 of more than 750 validators that authenticate transactions on the XRP ledger.

Initially, the Ripple ledger started with a hundred billion XRPs. Unlike bitcoin and many other cryptocurrencies, XRP isn’t created on a particular timeline through mining  – or the act of securing decentralized networks. Instead, the 100 billion XRPs (the cryptocurrency’s coded limit) are already available, with most under the control of Ripple itself. Ripple currently controls about 61 billion XRP. This makes Ripple a steady and trusted network for all money exchanges, payments, and transactions. It does beg the question of – how decentralized it is if the supply of the coins can be changed anytime by Ripple.

Ripple’s XRP ledger does not depend on Proof-of-work or Proof-of-stake mechanism, but it relies on a Consensus mechanism that makes it secure against double-spending. This makes the XRP ledger centralized and not decentralized, where decentralization serves the purpose of removing government interference.

Even though critics have pointed out that Ripple is not 100% decentralized, Ripple’s virtual payment protocol is very useful and permits comfortable, easy, and secure transactions for banks and peer-to-peer networks. And chief among the criticisms leveled at Ripple is that the project is not truly decentralized, and so is little more than blockchain hype on a traditional system. It’s always interesting to check whose predictions have worked. It helps define reliable XRP Coin price prediction sources.

The bitcoin developer and perennial blockchain skeptic Peter Todd tweeted a number of his concerns, and while they’re all focused around the question of decentralization, his real uneasiness with Ripple revolves around the company’s opaqueness. Todd continued, saying that for Ripple’s bank clients, being transparent about its model as a centralized system that users can fully validate shouldn’t be much of a problem.

Ripple, the company, is centralized, but the digital asset XRP is decentralized.  The reason Ripple is still somewhat centralized is that it can implement changes without a system consensus. Ripple(the company) has full access to Ripple nodes, and they decide whether they want to create new ones. In its defense, the XRP Ledger requires 80 percent of validators on the entire network, over a two-week period, to continuously support a change before it is applied. Of the approximately 150 validators today, Ripple runs only 10. Unlike Bitcoin and Ethereum — where one miner could have 51 percent of the hashing power — each Ripple validator only has one vote in support of an exchange or ordering a transaction. While Bitcoin and Ethereum are becoming more centralized over time, the XRP Ledger is getting more decentralized. Thus, you should follow the XRP news to be up-to-date and not miss the time for profitable investing.